A note from Susan

The reason I began this project was to bring awareness to the risks of Ovarian Cancer because I didn’t want anyone else to be a surprised and terrified as I was. Some of my strange symptoms included: extreme exhaustion, a strange discharge and a heightened sense of smell.

I encourage everyone to get regular gynecological check ups and develop a positive relationship with your healthcare providers.

You know your body best, if you are worried that something isn’t right, talk to your doctor. Don’t dismiss your symptoms. Be persistent. Early stage detection is linked to better outcomes.

Because I’m not a medical professional I offer the following links to agencies who’s focus is women’s health. I’m sure you can find more.

Is It Cancer? Know the Symptoms article by Gynecologic Oncology University of Colorado

Below are excerpts from submissions by backers that appear in the book the Gathering Goodness Mosaic. Additional stories and images will be added or changed in the months and years that follow. Keep in touch to hear about updates by joining our spam-free mailing list. 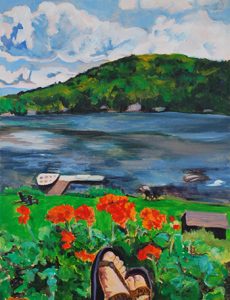 My Place of Peace Joy & Contentment

My place of joy, contentment and peace is our home on Drews Lake. No matter what season it is, our home always gives us a sense of grounding, solace and belonging. Doug and I settled here after giving much thought to where we could go after retirement. Drews Lake was a place we both agreed gave us so much joy. My mother was raised in Houlton and we came back here each summer to be summer residents of the lake. To date, the family still owns the camps built by my parents and my grandfather. The camps, the campfire, and beach are my roots and I returned to them.

At the age of 4, I was cruelly upstaged by the sudden arrival of Cousin Bruce. The blessed babe arrived in a taxi, swaddled in a tartan travelling rug. No star appeared in the Eastern sky, neither kings nor wise men followed the cab, but the hosannas of praise for the new arrival might have been heard in Bethlehem and beyond.

Cousin Bruce, it must be admitted, was a bonnie bairn, with thick black hair and dark eyes as deep as Australia. He was also smart, quick to walk and very soon chattering for Scotland. By age three he could spell comb with a B. This became his party piece. Spell comb Bruce! C-O-M-B. Upon hearing this feat listeners were often struck D-U-M-B!

But Cousin Bruce was impossible to resent. We were two little boys and in a family of strong women, boys had to stick together or risk being smothered. We became allies, co- conspirators and fast friends. We were sent to a posh school together, George Heriot’s, founded in 1658 and named after Jinglin’ Geordie, Court Jeweller to King James the VI. Our parents glowed with pride. We pretended to hate it, refusing to wear the ridiculous school cap and generally running it down at every opportunity.

Aged 10, Cousin Bruce decided to enter the school music festival, a yawn-fest generally reserved for wobbly tenors and cello-scraping saps. Cousin Bruce insisted there was no rule against contemporary music and dared the authorities to ban him. The music department caved and come the day, before the gobsmacked Heriot’s Nation, he mounted the stage, hooshed his guitar up to the mike and burst into song:

Loved to play all day with his little tinder box

He lost, to the wobbly tenor. Constabulary Duties carried the day but for sheer bravado Bruce won the popular vote hands down.

In 1962, Cousin Bruce and I discovered the Beatles and suddenly life became a lot more interesting. We pooled our pocket money, ordered each new single weeks in advance, joined the fan club, took guitar lessons and grew our hair as long as we dared. Bruce had the advantage of actually looking like a pop star, his straight dark hair falling into a perfect McCartneyesque moptop. My curly ginger hair made me look like Noddy Holder after a hard night.

By late-teens, we had diversified musically and become folkies. Bob Dylan, Bert Jansch, Incredible String Band and Leonard Cohen, these were our new heroes. I showed him how to pick clawhammer. He discovered open tunings. To look hip, we stripped the varnish off our guitars, wore black and affected the sullen demeanour beloved by aspiring bohemians since time immemorial.

At 18, fresh out of school, Cousin Bruce got married to his teenage sweetheart in a mustard suit, purple kipper tie and high-heeled Cuban boots (Bruce, that is………..not the wife). The wedding photos were hilarious. He had so much hair he seemed to be peering out of a bush. John and Yoko to the life; instant karma, but destined never to last.

Soon after Bruce dropped out of college, joined a rock n’ roll band and hit the road in a regulation, hand-painted, Hi- Ace van. At a gig, he met an American girl and fell in love. Yoko got the heave-ho and Bruce took a ticket to ride, to San Francisco, with his latest flame.

Always resourceful, Cousin Bruce soon got into computers, the whole Silicon Valley schtick. He became an expert in Photoshop, wrote books on it, gave lectures for mad money. He hung out with old hippies; jammed in a geezer garage band; sourced his wine in the Napa Valley; became a Buddhist and a fanatical eclipse-watcher, jetting off to Iceland and India to stare at the sun.

As he grew fat and middle-aged in exile, Cousin Bruce rediscovered his Celtic Roots. He got himself kitted out in full Braveheart regalia. He longed for the glens of home: Glenmorangie, Glen Fiddich, Glen Farclas and Glen Grant, bottles of which were stowed in the cellar alongside the Napa Merlots and Cabernets.

Then, Cousin Bruce got sick. He was big and bear-like, ate all the wrong stuff, liked his coffee diesel-strong, smoked and drank too much. Heart trouble we knew about but then we learned he’d contracted lung cancer too. At an alarming speed the dread realisation that Cousin Bruce was dying dawned on us all.

Near the end I called to ask how he was. Bad, his wife said but here, speak to him. I was rigid with fear. What do you say to a man staring down the gun-barrel of extinction? The line was bad, his voice was weak, and I was groping my way through a forest of halting platitudes. Any second I might lose it, but I finally managed to blurt out that I loved him, always had. He muttered something I couldn’t quite catch but I hope it was that he loved me too.

Months after the funeral, the ashes of Cousin Bruce were brought home so his Scottish family and friends could say goodbye. It was a dreich and misty day, perfect funeral weather, and as we opened the urn and scattered the ashes on Dunsapie Loch, a lone piper played a pibroch of his own choosing, The Flooers o the Forest are a Wede away.

Then, an odd thing happened. As if from central casting, Celtic division, two magnificent swans came gliding across the water. Perhaps the pipes had stirred something primal. Or maybe it was feeding-time but when they arrived at the slick of ash, they stopped and seemed, for all the world, to stand guard. Sentinels ushering his soul into another realm, said Bruce’s Buddhist chums. Oh to be a Buddhist at such times.

The following year, Cousin Bruce was posthumously inducted into the Macworld Hall of Fame. All along, and unbeknown to his ain folk, he’d become a living legend among the techies. And delivering the eulogy was none other than Graham Nash of The Hollies and Crosby Stills & Nash. Cousin Bruce had been Nash’s go-to guy for photo technology for years but he never thought to tell us. Did we ever imagine such a thing possible? When he and I were cranking out Hollies’ tunes on our stripped-down guitars in Auntie Jan’s front room? Not a bit of it.

To depart before his time, to die forever young, as a be-kilted bass-playing Buddhist with a grasp of the good things in life was typical of Cousin Bruce and as the Tim Maguire song concludes:

Up or down, there will be sparks flying. Slainte Big Man!